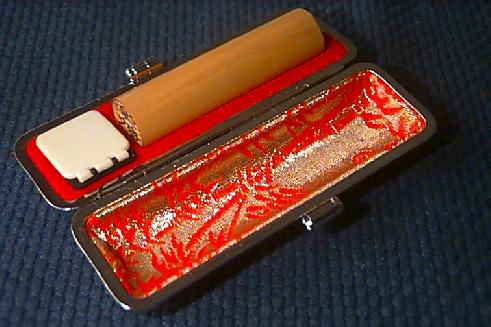 In Japan, people do not sign; They use stamps. They are called Han or Hanko, and every individual in Japan has one. We will translate your last name into Kanji characters and create a Hanko that is just like the one people in Japan use.

The price of a hanko is determined by three things: material, shape and size. The size is determined by the number and the complexity of the characters. If you are interested in ordering a hanko, please request a price quote. We will inform you the size of hanko that is appropriate for your name. Then, you can find out the price on the charts below. Also, please check out Hanko FAQ.

Q: I'm not Japanese nor am I living in Japan. When and how should I use a hanko?

There are no rules. For example, you can stamp it next to your signature on a letter like this. Or, you can put it to seal an envelope, like this. Also, if you run a martial art dojo, you can use it on your certificate.

Q: How long would the delivery take?

Deliverly is usually 2 ~ 3 weeks. If you spend extra, we can instruct the people in Japan to put it in an express mail, but since it's coming from Japan, it would still take about a week.

Q: Will it be my first name or my last name? Or will it be both?

Hanko is almost always with one's last name. There is a kind of hanko that uses both first name and last name, but most people in Japan do not use it unless the occasion is as serious as purchasing a house. An average Japanese person either does not have this type of hanko or uses it once or twice in life time.

Q: How will my name be translated into Kanji? Is it possible to translate non-Japanese names into Kanji?

There is another approach you might want to consider. Some English name have meanings. For example, consider a name like Blackwood. For a name like this, we can try a different approach, which is to pick characters that mean black and wood. With this approach, people in Japan cannot know how your name is pronounced, but they will know what it means instead. Some people (whose names mean something good) prefer this approach.

Q: Should I buy a round hanko or a square hanko?

Q: Is there any way I can put both the name of my organization, for example my Dojo and my name on my hanko?

Yes, althouth this is not very common, there is a special kind of hanko, called Daihyosha-in. We can put your name (or your title) at the center and the name of your organization in circle. 18mm in diameter. Three types are available: Tsuge, Kurosuigyu, Orandasuigyu. If you are interested in this type of hanko, click here.

Q: I'm a Martial Artist Sensei. I want to put my title with my name on my hanko.

As a general rule, putting one's title on a hanko is a bad idea. In America, titles, such as PhD or Sensei or whatever, are something people proudly tell other people (Sure, it's a sign of accomplishment; why shouldn't you be proud of it?). However in Japan, if you are advertising that you are a PhD or Sensei or anything, it is taken as a sign of insecurity (Since you are not a Japanese person, people in Japan would take it as a sign of cultural ignorance). Confident and accomplished people, they believe, do not need to tell others that they are confident and accomplished. Other people will judge that.

Q: I'm going to Japan. Can I use my hanko on legal documents there.

Yes and No. You can use it in all situations in which your signature is required, such as receiving a certified letter or even when you are buying a vehicle. But you may not be able to use your hanko in situations that are much more formal that involve complex legality, such as purchasing a real estate, for example. To use your hanko in a situation like that, you need to register your hanko with the government.

Q: Can a man and a woman use the same Hanko?

Yes. Some Kanji characters have masculine meanings, and some have feminine meanings. So, if we know the gender of the user of a hanko, we will choose the characters accordingly. But there are also many characters of which meanings are neutral.

Q: Which font should I choose for my hanko?

Koin-tai is the most common font. 99% of people in Japan use this font. Organizations tend to use other fonts. But they are very difficult to read even for people in Japan. So, if you would like to make your hanko readable, choose Koin-tai.

Prices, Shapes and Sizes of Hanko

Tsuge: It's the most commonly used kind of wood for hanko. It can be round (diameter: 12mm-18mm) or square (15mm-30mm). 3 different kinds of font are available.

Kuro Suigyu: Horn of Water Buffalo. Popular among men. It can be round (diameter: 10.5mm-18mm) or square (15mm-30mm). 5 different kinds of font are available.

Oranda Suigyu: Horn of Dutch Water Buffalo. Popular among women. It can be round (diameter: 10.5mm-18mm) or square (15mm-30mm). 5 different kinds of font are available.

Gomu In: Rubber Stamp. It can be various sizes and shapes. The price is determined by the area (mm2) rather than the number of the characters. You do NOT need to request a price quote. Please choose the size and place your order.

We will inform you the appropriate size of your hanko.

To order a hanko, you need to know the appropriate size for your hanko first. Please use the request form above.

This is a special type of hanko with your name (or your title) with the name of your organization, such as your dojo. To learn more about this type of hanko, click here.

Send the pictures on this page to your friends!

Go back to the Catalog on the Web.